This GT Alert covers the following:

Intellectual Property (IP) law allows individuals, under certain circumstances, to protect “creations of the mind”, granting the owner exclusive ownership and the right to monetize in various ways, depending on the type of IP in question. cause. When considering intellectual property protection in the equine industry, trademarks, copyrights and publicity rights come most immediately to mind. But there is another, often overlooked type of intellectual property protection that can be a powerful tool: design patents.

Design patents protect the outward appearance of a manufactured object and may overlap copyright and trademark protection. Design patent protection in the United States has existed since 1842 and covers “every new, original, and ornamental design”, explicitly making ornamentation a limitation of subject matter to the availability of a design patent and defining the scope design patents based on their visual character. Although the Supreme Court has ruled that a design “must have an aesthetic appearance that is not dictated by function alone” (see Bonito Boats, Inc. vs. Thunder Craft Boats, Inc.., 489 US 141, 148 (1989)), given the subjective nature of “aesthetically pleasing”, the emphasis on what constitutes an “ornamental design” is whether the appearance of the article is essential. to the function of the article to which the design is applied. If there are several ways to achieve the function, the more a particular pattern will be considered ornamental.

Design patents only cover ornamental, not functional elements appearance of an object, with drawings of the model essentially constituting the disclosure of the patent. They are characterized by a “D” at the beginning of the patent number, and a single claim referring to a drawing or a set of drawings.

Like other US patents, design patents must meet the following requirements:

While utility patents carry maintenance fees, requiring periodic (and increasing) payments to the Patent Office to keep them in force, design patents do not have maintenance fees. They currently have a term of 15 years from their date of issue.

Design patents also offer the possibility of international protection, either through the Paris Convention or the Hague system, although foreign jurisdictions have varying requirements which require careful consideration if filing outside the United States is a goal. 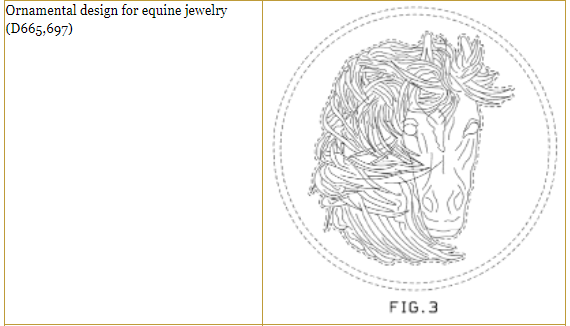 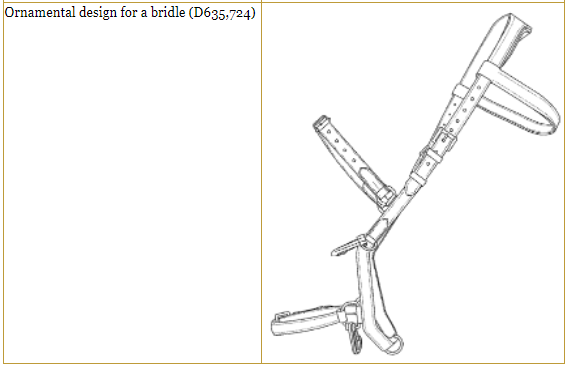 Design patents can be extremely valuable and can be used in conjunction with copyrights and trademarks to help protect intellectual property in the equine industry. Although often overlooked, they are a powerful tool that can help provide protection in the United States and abroad.