The recent Federal Circuit decision in Super-Sparkly Safety Stuff, LLC vs. Skyline USA, Inc.. reinforces best practices in the enforcement of design and sourcing patents. An important takeaway from this decision is that when enforcing design patents in litigation, patentees must develop documentary evidence from facts and expert witnesses to assist the court in the ordinary observer analysis to ensure that motions for summary judgment of non-infringement are decided with a sufficient record. Another important consideration for design patent holders is that when protecting designs, rights holders should consider strong filing strategies to protect the iterative and variable aspects of significant designs. These strategies can help companies avoid an early judgment of non-infringement when enforcing their design patents by limiting a defendant’s options during the early stages of litigation.

Super-Sparkly sued Skyline in the Northern District of Texas for infringement of U.S. Patent No. D731,172, titled “Rhinestone Covered Container For Pepper Spray Canister.” Super-Sparkly has accused Skyline of infringing the ‘172 patent by selling its “Bling It On” line of rhinestone-decorated pepper spray cans. Below are perspective and bottom views of the ‘172 patent juxtaposed with images of the accused Skyline products. The claimed design includes rhinestones on the sides and bottom, while the accused design includes rhinestones on the sides of the cartridge but not the bottom.

This case came to the Federal Circuit in an unusual procedural posture. In the district court proceeding, Skyline sought partial summary judgment of non-infringement. Instead of filing a substantive response, Super-Sparkly offered to extend the time to respond and asked the court to defer ruling on the motion pursuant to Rule 56(d). Under rule 56(d), a court may refuse or defer consideration of a motion for summary judgment if a non-move can demonstrate that “it cannot present material facts to support its objection.” Fed. A. Civil. P.56(d).

The district court granted Skyline’s motion for summary judgment,[1] and in rejecting Super-Sparkly’s procedural arguments, the court held that Super-Sparkly failed to explain how a new discovery would raise material facts relevant to the issue of non-infringement.[2] On the merits, and in light of Super-Sparkly’s lack of response, the court found no genuine issue of material fact relating to the absence of infringement.[3] The court held that the lack of rhinestones on the bottom of the accused product constituted a “significant” difference from the claimed design “particularly in view of the relatively simple and limited elements of the product designs, and would be obvious to an ordinary observer” .[4]

First, the Federal Circuit found that the claimed design and the accused design were obviously different.[7] According to the ordinary observer’s test for infringement, an accused design does not infringe if the claimed and accused designs are “sufficiently distinct” and “obviously different” such that an ordinary observer would clearly find not both designs “substantially identical” based on the standard set forth in Egyptian Goddess, Inc. v. Swisa, Inc.[8] The Federal Circuit found that the ‘172 patent claims a “very simple design, in which rhinestones are applied to the vertical cylinder and bottom surface of a cartridge.”[9] In the Court’s view, removing the rhinestones from one of these surfaces – the background – constituted “such a significant departure from the claimed design” that an ordinary observer would not find the two designs substantially identical.[10]

Second, the Federal Circuit held that a comparison with the prior art, although unnecessary in the case of “manifest dissimilarity” under the egyptian goddess test is found – further established that the accused design did not infringe. Where the designs are not obviously dissimilar, the ordinary viewer’s analysis compares the claimed and charged designs to the prior art because “differences between the claimed and charged designs which might not be discernible in the abstract may become meaningful to the hypothetical ordinary observer familiar with the prior art.[11] Prior art designs, shown below, included rhinestones around the majority of the cartridge but not on the top or bottom. “As such, the attention of a hypothetical ordinary observer familiar with dazzled pepper spray canisters would be drawn to the presence or absence of rhinestones at the bottom of the cylinder.”[12] The Federal Circuit concluded that the casual observer would find the absence of rhinestones at the bottom of the accused design significant and would not confuse the accused design with the claimed design.[13] 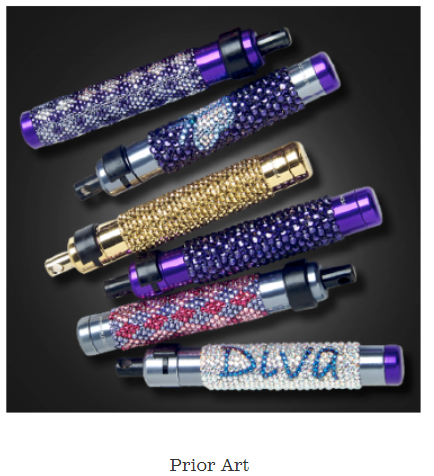 Read broadly, this decision may lower the bar for establishing no infringement on summary judgment. The Federal Circuit described the claimed design as a “very simple design, in which rhinestones are applied to two surfaces of a cartridge”. Removing rhinestones from a surface has been found to make the designs obviously dissimilar and, moreover, has been found to create a significant visual difference in light of the prior art. By failing to describe other ornamental aspects of the design, such as the size, shape and pattern of the rhinestones, the relative proportions of the lid of the container, or whether the rhinestones extend to the bottom of the container, this decision suggests that the absence of a major design element from a surface of an incriminated product may on its own be sufficient to establish non-infringement at law.Take away food

On the other hand, when read in light of procedural posture, this decision may encourage patentees to develop sufficient evidence to survive summary judgment, before such a motion is brought. Not only did Super-Sparkly fail to submit evidence in opposition to Skyline’s motion, it failed to file a substantive response. On appeal, Super-Sparkly was forced to rely solely on his attorney’s argument because the case lacked additional evidence.

In other cases, patentees have survived summary judgment by submitting expert testimony, inventor testimony, and evidence of facts relevant to ordinary observer analysis. Useful testimony that successfully supported a summary judgment challenge related to the importance of certain aspects of the design to the overall impression of the design, the differences between the claimed design and the state of the art, and the similarities between the claimed design and the charged design.[14] Since this evidence was missing from the file of Super-Sparklingthe court could not rely on it as creating genuine questions of fact to deny summary judgment.

Either way, this decision reinforces the importance of getting full design coverage. Companies looking to protect their product designs should consider a robust filing strategy that includes protecting not only the overall product design, but also visually striking or significant parts of it. Using such a protection strategy can make it difficult for competitors to design around a portfolio of design patents by simply omitting design elements from a surface or part of their product.